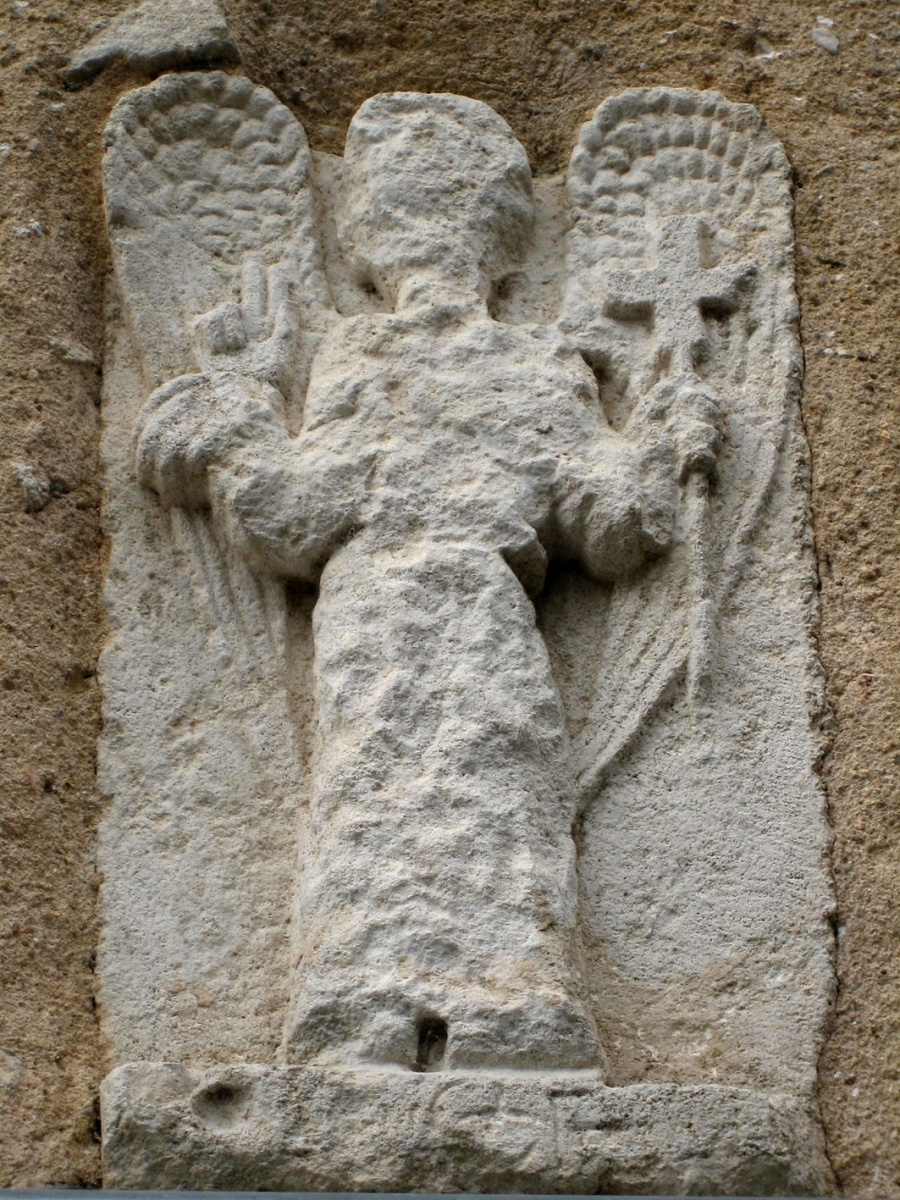 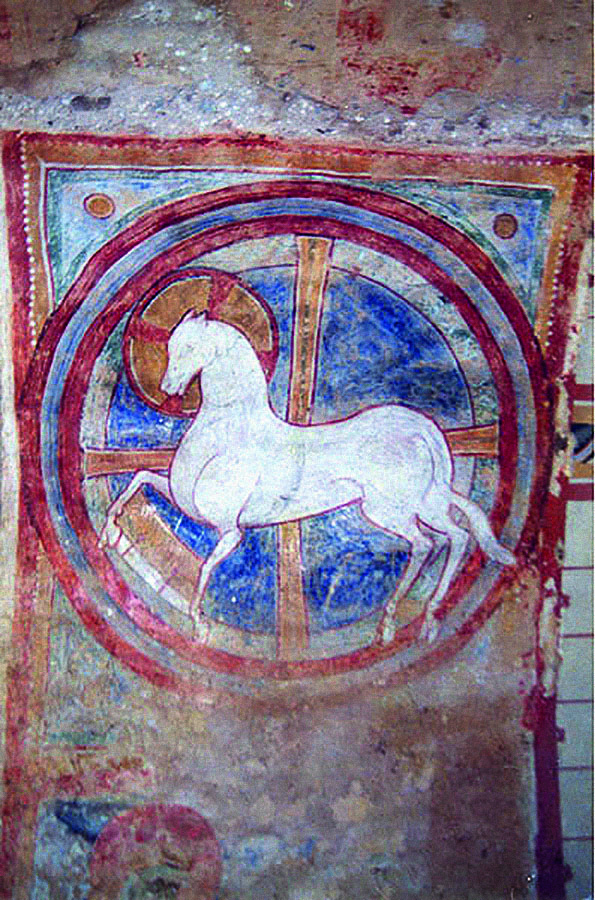 Listed as Historical Monument in 1984 (murals, facade and church tower)

The former monastic church of the Maison-Dieu became a “chapel” when the seminary school settled in the building after a period of revolution. The church tower and the facade, decorated with a frieze depicting the Childhood of Jesus-Christ, date from the 12th century. The seminary school called on the Christian Art Society from Saint Grégoire de Tours to decorate the inside of the church: geometric decorations and iconographic topics related to religion in the 19th century cover all the walls and vaults. This eclectic and “academic” composition, dated from the Second Empire (between 1858 and 1870), was painted a secco. These vivid images were intended for the little seminarians in preparation for their future mission (a cleric’s ordination, Apostles sent for missions…) .

Back from a pilgrimage to the Holy Land in the beginning of the 12th century, Robert du Puy, Lord of Montmorillon, devoted his fortune to rebuild the Maison-Dieu, founded in the end of the 11th century. Monastic and hospital buildings coexist for the life of the monks’ community and the patients. The monastery-hospital, rebuilt in the 17th century by the reformed Augustinians of Bourges, became a seminary school in the 19th century until the 1960s. The ensemble is composed of several buildings. 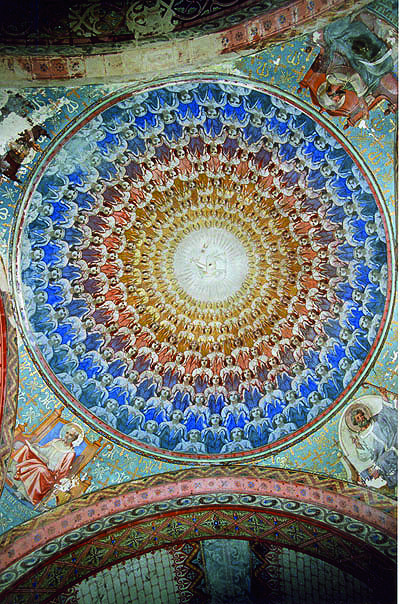 This ancient Romanesque church that was dependent of the abbey of Bourg-Dieu in Déols (Indre) presents a set of murals painted in 1859, under the pontificate of Pie IX (who was Pope from 1846 to 1878) and the episcopate of Monsignor Pie (bishop of Poitiers from 1849 to 1880). The writings discovered during the restoration of 2009: “1859 Carré peintre à Saint-Savin” (1859 Carré painter in Saint-Savin) and “1859 Perot plâtrier” (1859 Perot plasterer) also indicate the name of the workers who took part in the construction site. Varied painted patterns highlight the architecture of the choir, which was renewed during several periods: colored checked pattern, rinceaux, geometrical patterns, liturgical objects…

In the choir of the church, where the vaults subside, the paintings also underlines the forms of the Four Evangelists’ symbols: the lion of Mark, the Angel of Matthew, the bull of Luke and the eagle of John. In the 19th century, the figure of the lion probably in bad shape, was mistaken for another figure. During the last restoration (2009), its true shape was “recovered”; the outlines of the animal as well as its mane were drawn again. Thus, the lion remains in perfect harmony with the other Evangelists’ representations (even if the head of the figure was preserved).

The parish church of Saint-Divitien de Saulgé is open every day.
Guided tours for groups are available all year by reservation.
Info: 05 49 84 30 00. 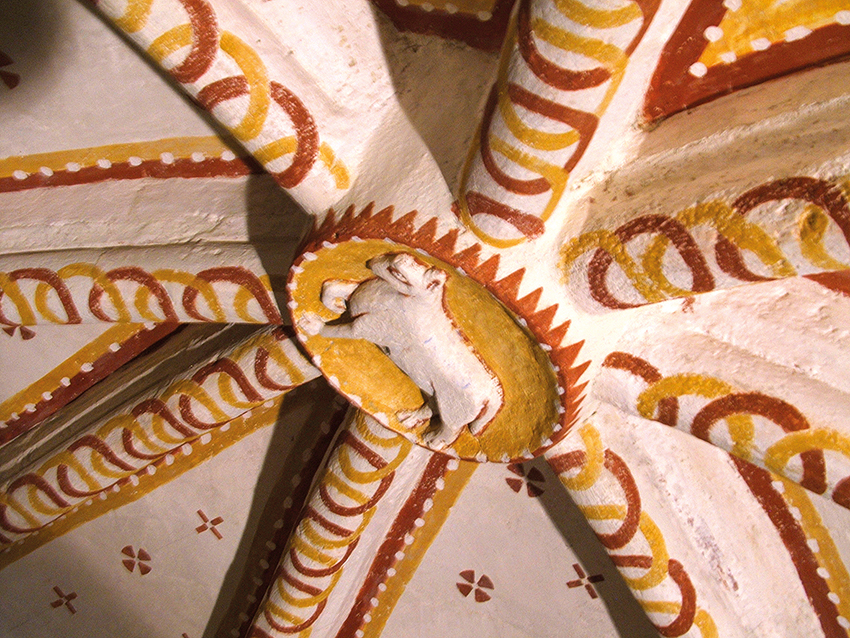 The Chapel of Sainte-Catherine of Jouhet

Listed as Historical Monument in 1908

The 15th-century murals of the funeral Chapel of Jouhet were undertaken on the initiative of Pierre de Boschage, the priest who founded the Chapel and Jean de Moussy, the Lord of the parish. The three nearby murals of Antigny (Chapel of Sainte-Catherine), Boismorand (oratory of the Castle) and Jouhet can be closely linked: they were financed by the same person and similarities can be noticed regarding the themes (Childhood of Jesus Christ, the Last Judgement…). The pictorial program of Jouhet, painted a secco, gives prominence to the scene of “The Three Living and the Three Dead” which takes up almost 20% of the painted surface.

Given the quality of the details (mortar joints, floors scattered with flowers…) and the varied patterns (damask backgrounds for the scenes…) – elements that were rediscovered thanks to the restorations of 2005 – the murals of Jouhet are one of the pearls of the Valley of Frescoes.

The Three Living and the Three Dead

The story of The Three Living and the Three Dead, from the 13th-century literature, tells the encounter of three young and rich knives with three corpses who address them. The young men can hear their warning: “what you are, we once were; what we are, you will be.” This moralistic theme tends to remind the Dance of Death theme, also very common in the monumental painting of the end of the Middle-Ages.

The key is available at the café “Val de Gartempe” in exchange for the admission fee. 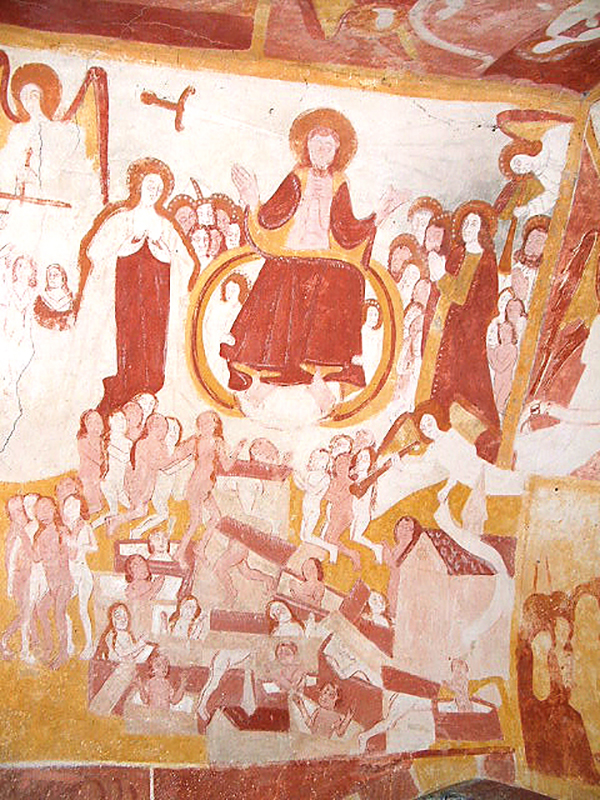 The Church of Saint-Germain

Registered in the "Additional List of Historical Monuments" in 1993

Located in the edge of the Gartempe river, the church was an outbuilding belonging to the abbey of Saint-Savin in the 12th century. Its murals, which can still be admired, dates from the third quarter of the 19th century. The choir is decorated with polychrome paintings as well as surprising grisaille paintings by Octave Pichault (1827-1907), native of Poitiers. These paintings, depicting scenes from the life of Saint-Germain bishop of Auxerre, are characterized by an impression of bas-relief. Is added the image of a Christ sat on a throne with two angels (semi-dome vault) and two figures of saints: a Carthusian and Sainte-Geneviève (walls of the right bay). As part of a general restoration of the building (2005-2009), the work on the paintings (cleaning the pictorial layer, fortifying the coating, homogenizing the decor…) made the bright pink shades that give the illusion of relief appear, which is specific to grisaille painting. Besides, the restoration work was extended to the paintings of the nave, which harmonized the different parts of the murals.

Unlike polychrome painting, grisaille painting is characterized by different shades of one color (generally grey). Based on a game of shadows and lights, it gives to the depicted scene the illusion of a sculpted relief. This technique probably comes from sculptors who, from the 14th century, were looking to give the impression of relief in their preliminary drawings by means of a nuanced chiaroscuro.

Outside office hours below, it is possible to borrow the key in exchange for proof of identity at the Tourist Office of Saint-Savin (info and hours: 05 49 48 11 00).

The Church Notre-Dame of Antigny

Listed as Historical Monument in 1913

The church was built in the 11th century, perhaps even earlier, on a particularly ancient site. This location – which corresponds with the current village square and a part of the village center – was a vast necropolis, as proven by the discovery of many Merovingian sarcophaghi, to which the remembrance monument called Lantern of the Dead (13th century) is the tribute. The church is located not far from what formerly was the sanctuary of an important Gallo-Roman town and the former military road linking Poitiers to Bourges crossing the Gartempe river at Gué-de-Sciaux.

The Romanesque church was renewed several times in the course of centuries. Until the beginning of the 1990s, the nave’s walls were entirely covered with whitewash and faux painted. Several restoration campaigns spread out since then: they brought to light several superimposed layers of murals. These murals were then revealed and restorers were able to study their nature, extent and preservation state. The most preserved mural covers all the nave’s walls and dates from the 14th century.

Scenes from the upper parts of the north and south walls depict several episodes of the life of Jesus Christ while those of the lower parts depict the life of saints (example: The Charity of St Martin, north wall). On the inside of the façade spreads out a representation of the Last Judgement.

The Chapel of Sainte-Catherine

Constructed in the beginning of the 15th century, the Chapel of Sainte-Catherine opens onto the choir, south of the church. Its pointed barrel vault and walls were decorated, a work financed by the Lord Jean de Moussy (1433-1510), at the end of this period. Inside a narrow space, the program depicts in a detailed way the Childhood of Jesus Christ, the Passion, the Last Judgement and the Christ in Majesty. These murals, listed as Historical Monuments in 1875 and 1913, were restored in 1985. These murals, painted in a quite unsophisticated technique, can be related to popular art in some ways. The scene of “The Three Living and the Three Dead” resembles the one painted in Jouhet. 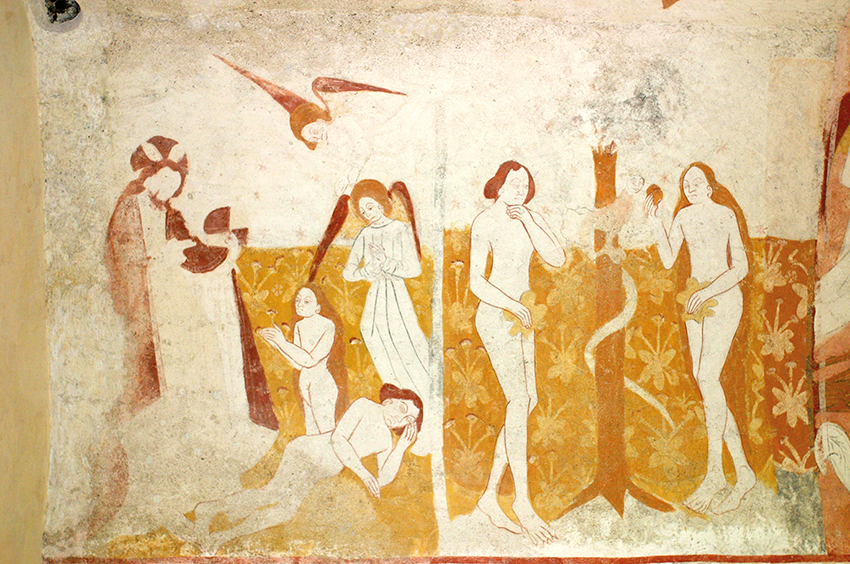 Watch out ! The Church Notre-Dame in Montmorillon is closed for public safety. The crypt is inaccessible.

The Gartempe river is 206 km long, has its source in the Creuse department and flows into the Creuse river in La Roche-Posay. Upstream, the river goes through granite landscapes and its steep-sided bed provokes a torrential wave between the steep rocks. Downstream of the “Door to Hell” in Lathus, the river becomes quieter, on the less uneven relief of the Poitou region.

Along the Gartempe river, on more than 20 km in the area of Montmorillon, ten civil and religious buildings create a thematic road called « Valley of Frescoes ». Something in common? The murals, dating from different periods.

The religious buildings of the Valley of Frescoes echoes a former tradition consisting in decorating the walls with painted murals. Numerous artists, from the unknown painters of the Romanesque period to renowned artists of a more present time, expressed themselves through narrative cycles or other decorations. Whether to embellish a sacred place or to teach faith and religion, the murals are both decorative and didactic. They do not only depict narrative scenes of figures, sometimes they are only a scenery where varied patterns appear and shows the wealth of a heritage that we need to preserve.

Before starting to consolidate the material and to make the artwork more readable, the restorer always studies of the painting’s preservation state. Nowadays, restorers try to stop and prevent deterioration by maintaining good and stable preservation conditions. This is called restoration-preservation.

The abbey is currently closed. We will be happy to greet you again on February 2022 !